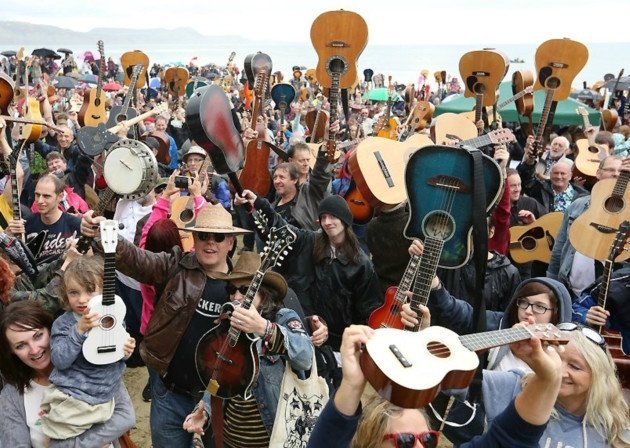 DEEP PURPLE singer Ian Gillan joined thousands of guitarists at the Guitars On The Beach event in Lyme Regis, United Kingdom to perform the band’s classic song “Smoke On The Water”.

Organizers were hoping to draw more than the 2,267 guitarists that appeared at last year’s record-breaking event.

As of mid-June, more than 3,000 guitarists had already signed up for the event.

The musicians were given the chance to play along to a number of songs, with the three main ones being Buddy Holly‘s “Rave On”, STATUS QUO‘s “Rocking All Over the World”, and “Smoke On The Water”.

Gillan contacted the organizers and asked them if he could to appear at the gig. He wrote in a letter: “I hear you might be doing ‘Smoke’ with the massed guitars, and if that is the case, I thought I’d offer my services if you need a singer.”

Geoff Baker, who has organized the event, told the Dorset Echo back in June: “My jaw hit the floor.

“This is sensational news. Ian‘s involvement will take Guitars On The Beach to an entirely different level. Everybody involved is thrilled and blown away by his hugely generous offer.”

He added: “Clearly ‘Smoke On The Water’ will now be the main event for many.

“It’s the classic guitar riff and not difficult to play. Massed guitar bands in America, Germany, Canada and Poland have all had a crack at the world record playing ‘Smoke’ — but none of them has ever been led by Ian Gillan before.

“This is going to be amazing, and many more people will now want to take part.

“It’s quite something to write home about, that you once played with Ian Gillan in a band with thousands of guitarists.

“‘Smoke On The Water’ was recently voted the greatest guitar riff ever written, it is universally popular and it is anybody’s guess how many will join the band now.”
Read more

Writing effective emails
Why are you studying for an MBA?
Animated podcast no 1: The UFO Investigator
Travelling in Burma - Nicola
The Foods We miss from The UK
Valérie - Parachute Jumping