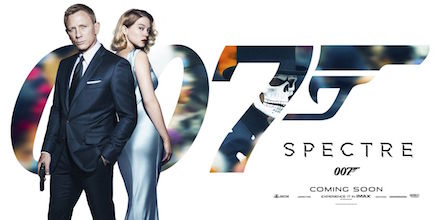 Susan manages to catch people as they leave the Gaumont Cinema in Toulouse, after James Bond – Spectre – The movie.
A cryptic message from the past leads James Bond (Daniel Craig) to Mexico City and Rome, where he meets the beautiful widow (Monica Bellucci) of an infamous criminal.
After infiltrating a secret meeting, 007 uncovers the existence of the sinister organization SPECTRE.
Needing the help of the daughter of an old nemesis, he embarks on a mission to find her.
As Bond ventures toward the heart of SPECTRE, he discovers a chilling connection between himself and the enemy (Christoph Waltz) he seeks.

James Bond – Spectre – The movie (2015) is the twenty-fourth James Bond film produced by Eon Productions. It features Daniel Craig in his fourth performance as James Bond, and Christoph Waltz as Ernst Stavro Blofeld, with the film marking the character’s re-introduction into the series.

It was directed by Sam Mendes as his second James Bond film following Skyfall, and was written by John Logan, Neal Purvis, Robert Wade and Jez Butterworth.

It is distributed by Metro-Goldwyn-Mayer and Columbia Pictures. With a budget around $245 million, it is one of the most expensive films ever made.

The story features James Bond’s first encounter with the global criminal organisation Spectre, marking the group’s first appearance in an Eon Productions film since 1971’s Diamonds Are Forever, and tying Craig’s series of films together with an overarching storyline.

James Bond – Spectre – The movie was released on 26 October 2015 in the United Kingdom on the same night as the world premiere at the Royal Albert Hall in London, followed by a worldwide release.

It was released in the United States on 6 November 2015.

It became the second James Bond film to be screened in IMAX venues after Skyfall, although it was not filmed with IMAX cameras.

James Bond – Spectre – The movie generally received mixed reviews from critics in comparison to its predecessor, being criticised for its length and writing, but received praise for the cast’s acting, the direction and score. As of 17 November 2015Spectre has grossed $548 million.