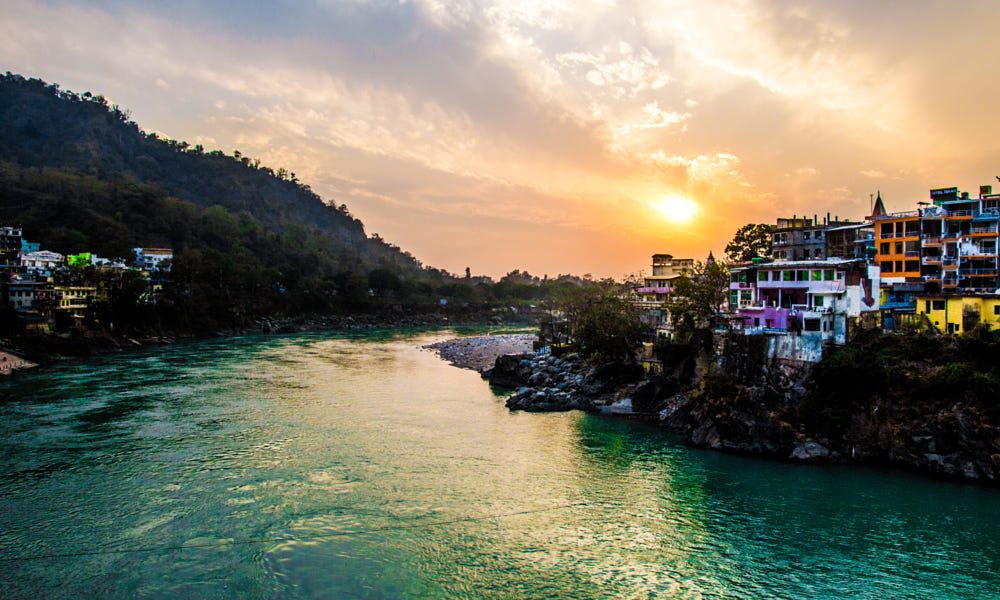 Rishikesh has been a part of the legendary “Kedarkhand” –  Legends state that Lord Rama did penance here for killing Ravana, the asura king of Lanka; and Lakshmana, his younger brother, crossed the river Ganges, using two jute ropes at the point where the present ‘Lakshman Jhula’ stands today.

Dehra Dun said about Rishikesh, ” A village or town beautifully situated on the right bank of the Ganges, on a high cliff overlooking the river. The place is developing very rapidly, especially since the construction of the new bridge over the Song river, the realignment of the pilgrim road from Raiwala to Rishikesh.“

The Ganges, one of the most sacred rivers to Hindus, flows through Rishikesh. Here the river leaves the Shivalik Hills in the Himalayas and flows into the plains of northern India.

Several temples, ancient and new, are along the banks of the Ganges in Rishikesh. Shatrughna Mandir, Bharat Mandir (Lord Vishnu’s avatar), Lakshman Mandir are the ancient temples established by Adi Shankaracharya. Shatrughna Temple is near Ram Jhula and Lakshman Mandir is situated near Lakshman Jhula.

The historical records mention that some pilgrims used to stay at Rishikesh as a resting place before moving onwards to the higher mountains for the pilgrimage while a larger number used to visit Rishikesh as the original destination and visited various sites between Rishikesh and Lakshman Jhula before returning.

However, Rishikesh has in recent decades shifted from a pilgrim to a tourist town. The International Yoga Festival introduced in 2000 has brought a new influx of tourists. Local markets have evolved from commercialising goods such as “local and religious handicrafts” to a more service-oriented tourist industry with “provision stores, cafes, hotels and yoga and meditation” as well as rafting