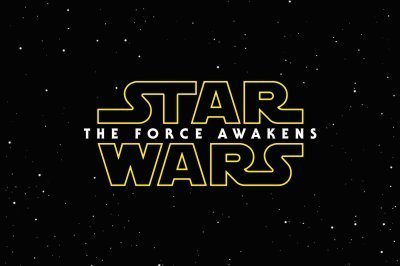 In this podcast, Chris who has never (ever) seen a Star Wars film, interviews movie goers as they leave the cinema after watching Star Wars – The Force Awakens, just to see what all the fuss is about.

It seems like he isn’t the only one, there is even a BBC Radio 4 program called “I’ve never seen Star Wars.”

Star Wars – The Force Awakens – Thirty years after the defeat of the Galactic Empire, the galaxy faces a new threat from the evil Kylo Ren (Adam Driver) and the First Order. When a defector named Finn crash-lands on a desert planet, he meets Rey (Daisy Ridley), a tough scavenger whose droid contains a top-secret map.

Star Wars is an American epic space opera franchise centered on a film series created by George Lucas. It depicts the adventures of various characters “a long time ago in a galaxy far, far away”.

The first film in the series, Star Wars (later subtitled Episode IV: A New Hope), was released on May 25, 1977 by 20th Century Fox and became a worldwide pop culture phenomenon.

It was followed by the similarly successful sequels The Empire Strikes Back (1980) and Return of the Jedi (1983); these three films constitute the original Star Wars trilogy.

A prequel trilogy was later released between 1999 and 2005, which received a more mixed reaction from critics and fans, compared to the original trilogy.

All six films were nominated for or won Academy Awards, and were commercial successes, with a combined box office revenue of $4.38 billion, making Star Wars the fifth-highest-grossing film series.

In 2012, the total value of the Star Wars franchise was estimated at USD $30.7 billion, including box-office receipts as well as profits from their video games and DVD sales.

In 2012, The Walt Disney Company acquired Lucasfilm for $4.06 billion and announced three new Star Wars films; the first film of that trilogy, Star Wars: The Force Awakens, was released on December 18, 2015.

20th Century Fox retains the physical distribution rights to the first two Star Wars trilogies, owning permanent rights for the original 1977 film and holding the rights to Episodes I–III, V and VI until May 2020.

Talking about films requires specific vocabulary so check out this quiz which will show you how to use new words in the right context.

How was the Covid jab for you ?
Why you forget your words when speaking English
Headhunter - Lucy
What is a bucket list?
Animated Podcast Number 10: Mystery shopping trip
The first time I saw snow