The symbols of Australia 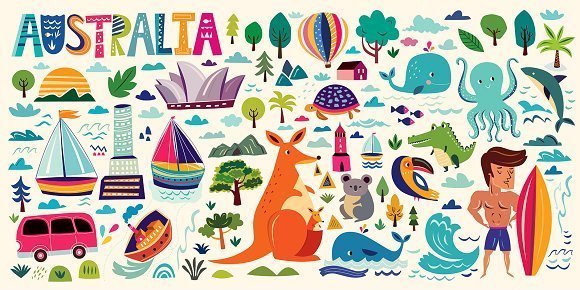 The stars of the Southern Cross represent Australia’s geographic position in the Southern Hemisphere. The large Commonwealth star symbolises the federation of the states and territories, and the Union Jack reflects Australia’s early ties to Great Britain.

Australia’s national colours are green and gold, the colours of its national floral emblem, the Golden Wattle.

The Coat of Arms

Australia Day is celebrated each year on 26 January. The date is the anniversary of the unfurling of the British flag at Sydney Cove in 1788.

Drawn from the collection of the National Museum of Australia, the Symbols of Australia exhibition explored some of the symbols Australians have chosen to represent themselves and their nation.

Australia — both ancient continent and recent nation — is represented by many symbols. National symbols are often used to represent a distinctive national identity. Some symbols endure, others fade away and new symbols develop as attitudes and values change. Often a source of unity and pride, symbols can also divide and exclude.

The Australian flag is legislated as an official symbol. Others, like the kangaroo and wattle, have changed from popular to official symbols over time. The boomerang was a symbol of the continent long before the nation came into being. In the 20th century, the Sydney Harbour Bridge came to symbolise Australia’s spectacular attractions, while the Holden car became an emblem of the everyday.