Is there a difference between Accent and Pronunciation in Language Learning? 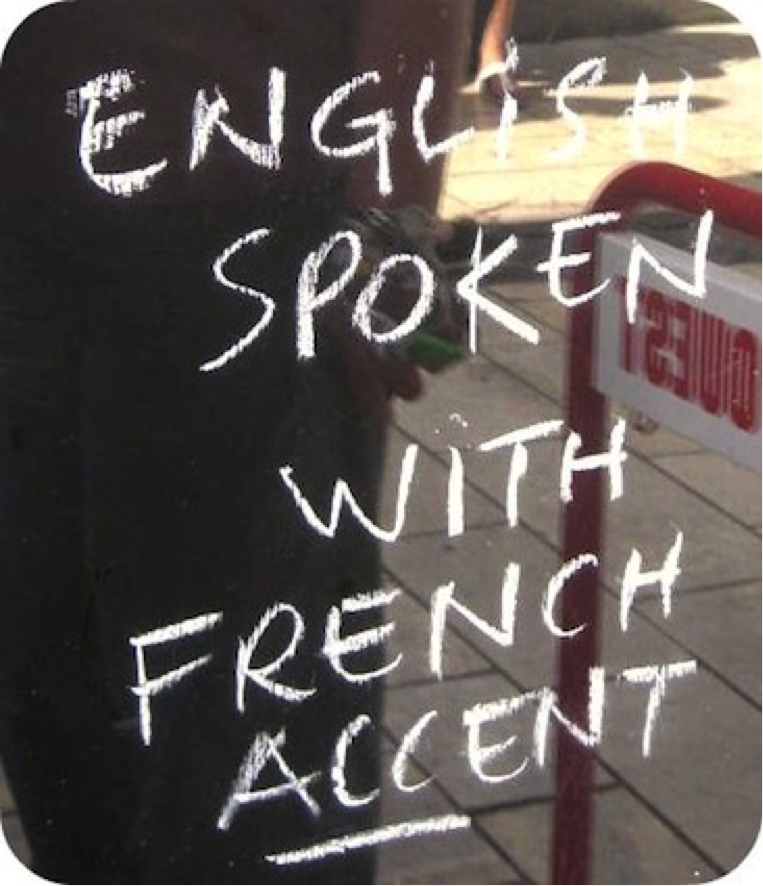 Is there a difference between Accent and Pronunciation in Language Learning?

Have you ever spoken with a foreign learner who has said that they are terrified to speak English as, in their words,  “I have a bad accent.”

Have you ever spoken about this and it turns out that they were told this by their teachers in school, which is not uncommon here in France, apparently – the premise being that it is better not to attempt to speak because of a “bad accent” rather than attempt to speak and reveal your “bad accent” to the world.

Is there a difference between accents and pronunciation, if indeed there is a difference – linguists appear to be generally ambiguous between the two, so I’ll set out what I understand to be where the differences lie.

I must state that I get by quite well in French, but I have an accent that immediately gives me away as being English and I don’t really want to change this, as it is sometimes an asset in certain situations.

This said, I firmly believe that accents can be left as they are, as long as pronunciation is understandable.

The word “accent” comes from the Latin, ‘Ad Cantus’ meaning singing, I won’t go into the various dictionary definitions, but we can all recognise that accent has a lot to do with identity – where a person comes from, in all meanings of the term – country, region, class, social status etc.

So what goes into the make-up of an accent?

Accents are what we acquire as we are growing up, from our parents peers and friends – as children we learn by imitation of what we hear, reproducing the sounds of our language based on models that we are surrounded by.

One of the aspects of pronunciation is accent, patterns of pronunciation and intonation which form a discrete entity that we call a particular accent, which can be on a macro and micro level, from region, or even village, to a national accent – which sounds absurd.

Cultural stereotypes can be consolidated and confirmed by accent, which can often go hand-in-hand with mannerisms assumed to be located in a certain nationality – the Gallic shrug being one example that strikes a tone with British people.

But, do we need to be able to imitate a Gallic shrug if we are speaking French in order to speak with a French accent.

The French, by the way are not aware of the “Gallic Shrug”, another example of stereotyping, along with the additions of “Oh la la’s” that nourish the assumed stereotype.

Without going off on a long tangent, I consider that accent is a blend of pronunciation, inflections, idiosyncracies, and even sounds such as ‘huh’ ‘ahh’, ‘arr’ etc., in English, ‘ben’ and ‘hein’ etc., in French – although being able to use and place the sounds used by natives accurately, is more a mark of fluency than accent and the two are not interlinked.

I am not saying that accent and pronunciation are the same thing, but they are so closely linked that it is difficult to give a ‘cut-and-dried’ definition and to map-out the boundaries of the two.
A strong accent in your mother tongue (L1), can make understanding very difficult, if not virtually impossible when speaking a foreign language (L2), but this is more linked to pronunciation than accent.

Take the pronunciation of the following in English : ‘Th’, ‘Sh’, the ‘ed’ sounds in past verbs such as, “wanted”, “worked” and “travelled” – three different pronunciations of the same two letters: ‘id’, ‘t’ and ‘d’.

The English pronunciation of ‘national’, ‘centre’, ‘origine’ and ‘prononciation’ in French throws up similar challenges, which supports my theory that people cannot hope to pronounce words in a foreign language without having clearly heard it first – and by ‘clearly’ I mean what was actually sounded and not what we think we hear.

Words that are similar in our own L1 to that of an L2 are even more difficult to pronounce, due to the fact that the model in our L1 is firmly rooted in our brains – it is a habit, that is very difficult to eradicate.

To illustrate this point, have a look at Dick Van Dyke’s idea of a cockney accent from the musical “Mary Poppins” – note that this an anglophone speaking with English being his L1.

He actually did a better accent in the film when he played the old bank manager, but this tells us a lot about accents.

Take a look at Brad Pitt playing an Irish gypsy in the film, “Snatch”, where his accent, I am told, is spot-on.

As we can see, certain people are able to reproduce an accent to near perfection – there are also people who can reproduce their idea of a foreign accent in their own language that is recognised by others who speak their language as being accurate – an example that springs to mind is the British comedy “‘Allo, ‘Allo” – although the accent is unrecognised by French speakers and when used in French produces a strange sounding accent, very far from any French accent that exists.

This is again, an example of stereotyping, as innocent as it may be.

Allo, ‘Allo, was never a success in France – which is not really a surprise (nor a disaster), but it is mainly due to the fact that the stereotypes which make the comedy work, are not so easily recogniseable in French as they are in English.

As far as accents go, people often talk about others having a ‘good’ accent.

What do they mean by this?

Good for who? Compared to what?

The answer is that they often mean that it is an accent that they can easily understand – this being linked to second language speakers.There is no goo or bad accent, the reality is, that there is no standard accent in English.

It was once said that the purest form of Queen’s English was spoken in Scotland, around Inverness. However, today, linguists talk about “Englishes” or varieties of English, rather than “English” as a separate and identifiable entity.

The idea that one form of English exists is misguided, due to the “plasticity” and evolutionary nature of language – it is always changing by way of its sponge-like nature, where influences, modes and technology are changing language at a lightning pace, language is constantly evolving.

Other problems that L2 speakers have with accents and pronunciation are that they often speak too fast to be understood, syllable and word stress are altered, vowel sounds are deformed and rythmn and intonation are often linked to their own L1 and not the L2.

An example of word stress changing the meaning of a sentences:

“I won’t watch the football match on television tonight.” can be read and interpreted in many ways, word stress can help us to get more of an understanding of the speaker’s intention however, have a look at the way this can be transformed by the stress falling on the bold words in the sentence.

As it stands, the sentence can be interpreted as the speaker not liking football, but this is only interpreted meaning and is not always guaranteed to be accurate of the speakers intentions, look how it can change:

“I won’t watch the football match on television tonight.” – Somebody else will or I would never watch a match on TV.

“I won’t watch the football match on television tonight.” – I insist that I will not.

“I won’t watch the football match on television tonight.” – I will be playing instead or I will be at the stadium in person.

“I won’t watch the football match on television tonight.” – Not the big match, but another one.

“I won’t watch the football match on television tonight.” – Not the football, but the rugby match, but I will watch it on TV.

“I won’t watch the football match on television tonight.” – I will be at the stadium to see it live.

“I won’t watch the football match on television tonight.” – I will record it and watch it in the morning.

A good tip for language learners is to note down the way words are said – thus working their ability to hear sounds in another language – phonetically, or at least the way in which they hear them, which can be very different to the way they are written.

The main reason for this is to remove the “parasitic” barriers of the L1 and to realise that the link between the written word and the spoken word is very much anchored in the pronunciation of the L1 and not the L2.

Examples of this are abundant and it is often curious to be corrected by a French native speaker when pronouncing an English word that has worked its way into the French language, but which is pronounced differently, generally because the stress and syllable pattern has changed, but also because the vowels are sounded as they are in French and not English.

Take for example “Rugby – Roohg-bee”, “Management – mahn – ahj-mon”, and “Thriller – Sree – lair” – sometimes unrecogniseable by English speakers, and when spoken back with the ‘correct’ English pronunciation can be equally difficult for French speakers to understand.

Some people will never get rid of their accent in a foreign language, and why should they? Do not despair, it is not a bad thing.

I know two people from Portsmouth in the UK, who, when speaking French, I can clearly hear their ‘Pompey’ accent, but French people often say that they have no accent when speaking French – perhaps there are certain accents that can easily be ‘lost’ in a second language – I haven’t heard the same with many French speakers, though.

Research shows that the age for true bilingualism is thresholded at around 14 years of age – which does not mean that they cannot reach a very high level of language competency, but there is a high possibility that they will never get rid of their L1 accent.

I would suggest that efforts are made less on accent eradication and more on listening skills and pronunciation – accents are charming at times, but bad pronunciation forms a barrier to understanding and ultimately, communication.

In short, accents tell us things about people – where they come from, their social group etc. – whilst pronunciation helps us to understand them, or at least what they are saying.

The symbols of Australia
Writing effective emails
Can You Use These Often Misused Words Correctly?
10 Killer Questions for Fred
Do we need to change the way we learn?
Listening strategies in Language Learning
English Podcasts
This website uses cookies to improve your experience. We'll assume you're ok with this, but you can opt-out if you wish.Accept Read More
Privacy & Cookies Policy