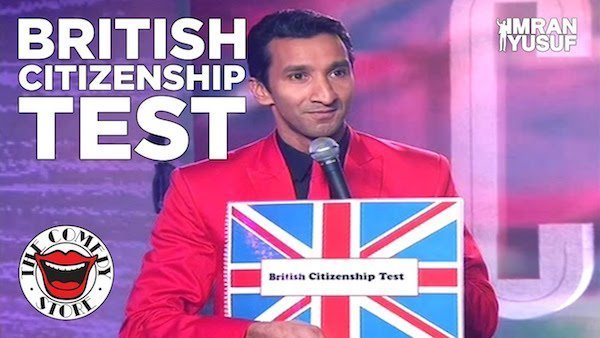 Stand up comedian Imran Yusuf takes a comical look at the ways that British pronunciation differs from American pronunciation during a show at The Comedy Store, using his very own British Citizenship test.

Imran puts a young Oscar through his own novel British Citizenship Test and tells us about his multicultural upbringing in Hackney Downs.

Imran Yusuf was born in Mombasa, Kenya, and initially grew up in Hackney, East London, before moving to Harrow, North-West London. Both his parents and two older brothers became refugees of the economic war following the expulsion of Asians from Uganda by Idi Amin in 1972. Yusuf also attended school in the USA from 1992 to 1993 and attended William Allen III Middle School in Moorestown, New Jersey.

Imran Yusuf initially performed two open spots in 2000 at a comedy show hosted by comedian Jeff Mirza, but then did not choose to pursue stand-up comedy in until the summer of 2003 while on sabbatical from his career in the video games industry. He was the first winner of the “You Must Be Joking” stand-up competition at Newbury Comedy Festival in 2004.

In 2010, he finally made his impact at the Edinburgh Festival Fringe in 2010 with his first solo show An Audience with Imran Yusuf receiving five-star reviews and a nomination from the Foster’s Edinburgh Comedy Awards for Best Newcomer.

Yusuf was the first performer in a free show to have received a nomination for the award.

On radio, Boxing Day 2010 saw Imran’s debut on BBC Radio 7’s The Now Show for a satirical look at current affairs and news. The special 45-minute show used Radio 4’s format for an extended show with Imran and guests.

A follow-up appearance on BBC Radio 4’s prestigious The News Quiz came soon after in February 2011, along with his television debut on BBC Two’s How TV Ruined Your Life with Charlie Brooker, offering an opportunity to see Imran in sketch-show action in the episode “Aspiration”. Further to this, between March and April Imran made a second appearance on The Now Show and a debut special guest slot on Arthur Smith’s Balham Bash (BBC Radio 4 Extra).

Summer 2011 soon saw more great news and opportunities coming for Imran when Zai Bennett, controller at BBC Three, green-lit The Imran Yusuf Show for a broadcast pilot in anticipation of a series for the show.

Interest from BBC America also saw Imran record a performance for Funny As Hell, a stand-up series presenting the best of British comedy in the United States.

Soon came Edinburgh Fringe 2011 where Imran took his all new show Bring The Thunder to the festival.

Continuing with the previous year’s trend of recording TV slots during the festival; Imran recorded a section of his show for Edinburgh Comedy Fest Live 2011 and BBC Comedy Presents: Free@TheFringe.