Communication is hearing what isn’t heard 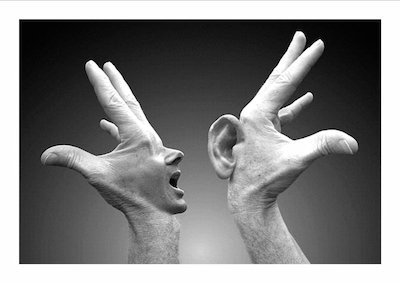 Communication is hearing what isn’t heard

As Peter Drucker once said, “The most important thing in communication is hearing what isn’t said.”

Furthermore, one of the pre-suppositions of NLP states that ‘you cannot, not communicate – everything you say and most of what you do will communicate something, so the idea of radio silence, can have the effect of turning the sound right up.

People often, mistakingly, imagine, that by doing nothing, they can avoid personal responsibility in communication, but, I am sorry to say, this just isn’t true, non-action is not an option, as it will be interpreted in some way by the listener(s).

We communicate all the time, even when we are not speaking, whether we are aware of it or not – and by any number of methods and mechanisms, from our dress sense to what actually leaves our lips as the spoken word.

It is not just what we say, but how we say it, where we say it and what we do, which carries a whole lot more weight than the words alone.

There are the non-verbal cues, such as hand gestures, facial gestures, eye-contact, or lack of, and posture to name but a few.

Would you buy a car from someone who didn’t look you in the eye? Nah, thought not.

These are the things that we can see and hear, but they don’t stop there.

We communicate by both action and inaction – sometimes a more powerful message is conveyed by doing nothing, than when we are actually doing something.

But hey! The person has done nothing – oh, yeah! BUT, they have, in some way, communicated some pretty strong messages – You cannot, not communicate.

In language, it is quite striking how pauses (intentional and well-placed, pauses) can speak so much louder than the words around them, good communicators use this effectively when speaking in public.

Posture is another strong way of getting a message across – people often like to play around as ‘the-part-time-psycholgist’ interpreting body language of others and extracting, sometimes, dubious conclusions – folded arms, does not necessarily mean defensiveness nor a desire not to open up. It could well be just comfortable, however, a slouching speaker can be looked at in a very different light.

However, put these, non-verbal cues together with verbal or paralinguistic clues, and you may be on to something.

Communication is a game of perceptions often devoid of reality – the importance is what is perceived by the listeners – not what is said, but what is understood and remembered. It is not a binary process – there are lots of variables that need to be taken into account, by the communicator – it is not my audience / listener’s fault if they get the wrong end of the stick – the responsibility stays firmly with me!

And, whatever I do, I will be communicating in a constant stream – I cannot, not communicate!

So just remember, when you are trying to persuade people of your super-mega ideas to change their lives, don’t slouch, avoid eye-contact nor speak with a driveling, monotonous voice – you are in fact going to convince them of something – but it won’t be to ‘buy’ your ideas, you nor your ‘product’.

If your intention does not match the response that is created in your listeners, things will happen – and when they fall stony-silent when you ask them if they have any questions, they are communicating a very strong message to you – most of it can be resumed by a resounding “Nah, not interested, sorry … Next!”

Communication and trust are the two principle ingredients for successful relationships, however, “The single biggest problem in communication is the illusion that it has taken place.” George Bernard Shaw