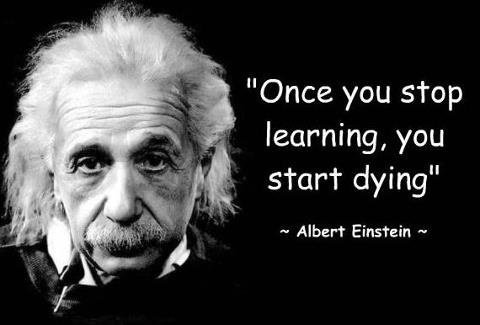 There have been excellent arguments that have promoted the notions of Lifelong Learning (LLL) since the 1950s (see the work of Carl Rogers et al.), but never has the argument for LLL held so much water.

‘Lifelong learning‘ is the “ongoing, voluntary, and self-motivated” pursuit of knowledge for either personal or professional reasons, often when school learning has finished.

Technological change has meant that top jobs that are available today, at the end of 2015, didn’t even exist back in 2005.

But that’s not all.

In universities, students are being prepared for jobs that don’t even exist today, learning to solve problems that don’t yet exist, with technologies that have yet to be invented… Scary, isn’t it!

It has been clear for anyone who lived through the ups and downs of the 1980’s and the ensuing years, that a job for life was something that they would never see.

Portfolio careers were inevitable, along with periods of retraining and adaptation to new markets, technologies and needs dictated by the job market.

Others viewed it as a sign of resilience and adaptability – today there is little chance that workers will stay for more than 5 years at most in one company and this is set to decrease over the decade.

The first text message was sent on 3 December 1992, when the 22-year-old British engineer Neil Papworth used his computer to wish a “Merry Christmas” to Richard Jarvis, of Vodafone, on his Orbitel 901 mobile phone.

Although a relatively durable technology, it will undoubtedly not see the end of the decade, being overtaken rapidly by microblogging (Twitter, Yammer etc.)

Some will not be in the job that they trained for a few years after university, OK we will probably still have doctors and dentists who remain in their profession (just as well after all that training / learning).

Perhaps the only skills that will have any value, in the relatively near future, are soft skills – learning to learn, and especially the capacity to learn how to learn and change.

As Carl Rogers said, “The only person who is educated is the one who has learned how to learn and change.”

This would also, pretty much, mean that testing, as a way of ‘checking’ learner’s knowledge, loses ground rapidly, as knowledge gets updated and actualised at an ever-faster pace.

Look around at younger learners, take a look at what they do… naturally.

Their first reflex for them when they need to discover knowledge or factoids is to get onto Google or a social network – they are accustomed to using these tools to find answers.

This, however, does not guarantee any deep learning, but I am starting to question if that is such a bad thing.

Carl Rogers, thoughts on teaching are perhaps more pertinent today, than when he said, “You know that I don’t believe that anyone has ever taught anything to anyone. I question that efficacy of teaching. The only thing that I know is that anyone who wants to learn will learn. And maybe a teacher is a facilitator, a person who puts things down and shows people how exciting and wonderful it is and asks them to eat.”

I think I will leave you, the reader to decide that for yourself.

Why do learners have difficulties listening in Eng...
Should you trust your first impressions?
Do you speak English?
Animated podcast no 1: The UFO Investigator
How Do We Know How Languages Are Related?
Miracle language learning solutions - neither mira...