How do you remember things? 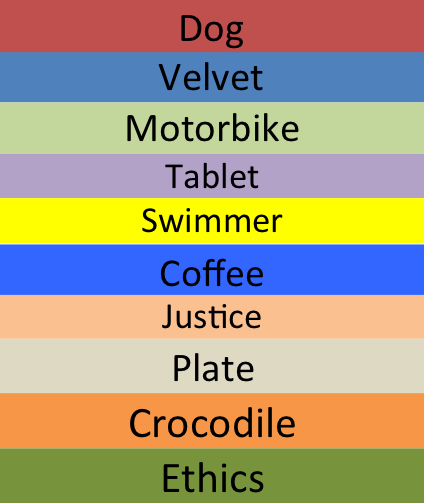 How do you remember things?

Ready for a little memory test?

Before reading any further, focus on the words at the top image for one minute, then read the article.

When have finished reading this article, write down as many of the words as you can remember and return to the top of this page to count up your total.

I was recently facilitating a training session with a group of learners and we got to talking about memory, and more specifically how we can use our memories and personal learning styles effectively.

I asked the question to the group, “How do you remember things?” and the answers were pretty standard with no real surprises in their responses.

All replied that they wrote things down in order to remember them as all claimed to have visual memories, which may or may not be true.

I don’t dispute the fact that some of us need cues in order to remember things – shopping lists, action plans, to-do lists etc., but what I do dispute, in a learning setting, is the efficacy of constant note-taking – then doing no active work afterwards with the notes.

It’s akin to “I’ve written it down, therefore I remember it.” Can you see any cracks in the paintwork there?

I say this mainly because I generally notice that certain learners take reams of notes during a training session, which remain in their files as a sort of life-belt to save them when they need it – although they never appear to use them, at least not in any apparently effective way.

This is great, but the problem is that they do nothing else with their notes afterwards and their files grow bigger and bigger as the training goes on, they are committed to paper and that’s about it.

If, on the other hand they then distilled their notes and had a strategy to transform that what is going to be of use, to their long term memory by way of activating the information from their passive notes, then that is going to help them, or at least I think it will.

How do you remember things? The whole point of learning is to transform actionable data to situations where they can be applied, in the broadest sense – to skills or behaviour change for personal or professional development – not to amass information that is learnt on the surface and that never penetrates to any greater depth.

The point I make with writing things down is that, there are indeed, times when we need to and there are times when it is totally unnecessary and only dictated by habit or routine.

If you see people (maybe yourself) taking notes during a meeting, for example, how much of that time that you are note-taking, is your concentration diverted from what is being discussed in the meeting?

How much are you missing? How do you remember things?

How many of the finer points are being missed during the time you are noting things down?

The fact remains that we rely so much on writing things down on post-its or on slips of paper that we rarely exercise our memories in any meaningful way.

Now I’m not saying that we shouldn’t write anything down but perhaps we should try to reduce the quantity and give our memories a chance to be exercised, worked on and active.

There are times that writing things down, on a to-do list or an action plan, actually helps the thinking and planning process as we take a step-out from producing to a more reflective planning and enter a visualisation phase.

When people say that they have a visual memory, this often discounts all other forms of memory – taste, smell, sound, touch, which are all parameters that help us remember things effectively.

The people with visual memories who smell a roast chicken and state that it reminds them of their grandmother’s cooking didn’t retain that memory by writing it down, nor did the memory come flooding back because of the look of the roast chicken – it was the smell that triggered it.

The same can be said about certain songs or excerpts of music, which trigger vivid memories of places, people and smells associated with the song.

So why do people insist that they have visual memories and can only remember in this way?

I feel that it is because in certain settings, especially in a learning setting, that people channel all their receptive skills into writing things down – it is a learnt habit that is hard to abandon.

The memory works by chunking or grouping things into connectible categories, so taking disjointed notes will never, in my opinion, help people to make links and therefore, effectively remember things in the long-term.

You can probably picture times at school or university when, just before the exams, you did your revision, wading through files of notes only to wonder what you wrote the notes about at the time of writing.

In fact the connection was there, when you took the notes, but was subsequently lost in the depths of space and time due to the lack of connections.

If you have been to a place once and didn’t rely on a GPS to get there, you will have unconsciously mapped-out the path in your head.

If you return to the place, you generally play the film of this memory back to yourself in your head.

You may have remembered landmarks, colours of building, the shape of the road and other things to help you retrace your steps.

What I am trying to say is that we all have many tools to help us to remember and all our senses are used, but we sometimes favour specific senses consciously without being aware of our natural unconscious preferences.

Working memory span is very ephemeral and can be as short as a few seconds so information must be processed actively in order that is can be stored in the long-term memory and later recalled.

So, I decided to test the theory mooted by this group of learners.

I split them into two distinct groups and decided to test their ability to remember a string of ten words – they are French so we used English words.

Interestingly, this group wrote the words very big, in great sweeping strokes of their fingers and hands and had to move at times to finish the word that they ‘wrote’ in the air.

During the 4 hour session I checked at hourly intervals on both groups, and how many of the ten words they had retained.

I realise that the scientific value is probably not huge but in terms of self-awareness for the group and the natural curiosity it spawned, it was quite amazing.

Now, I realise that this, in no way constitutes empirical evidence, it is however, interesting to note some of the differences which impacted on the working memory of the group.

The group who had written the words on the computer tried to re-visualise what they had written, whilst the second group went through writing the words in the air again without being prompted.

The question I would ask here are:

There are probably more questions that could be asked, but the real value is that, in this particular group, they were prepared to abandon the received ideas that they shared at the outset regarding the way they worked their memory and how they were going to attempt to try new ways of working on other aspects of their memory (Aural, tactile etc.) in order to increase their effectiveness regarding their learning – we will see what happens.

The point is, that a multi-sensorial approach is logically going to help with memory much more effectively than a unilateral approach as we are largely discounting a whole host of ‘weapons’ that we already have in our armoury.

It would seem that the second group actually visualised the words that they wrote in the air, forming the words with their fingers, were dynamic and active, in the sense that they coupled imagination with movement, using parts of the brain that is receptive to experiences and therefore retained a lot more due to this.

I will reiterate the fact that this is not a controlled experiment with no empirical evidence, on a small group mostly for fun to raise awareness – and it was good fun!

I wonder, however, how the fact that my kids, (16 and 18 years old at the time of writing) hardly ever write anything at school and college – they write most things on a tablet or computer, will be affected by transient memory episodes.

I also notice that they have, what I call, ‘a hypertext memory’, that is to say that they often read things on a tablet, smartphone or computer and rarely get to the end of any articles, but often click a hypertext link in articles to be led to other related sources to what they are reading.

Mindmapping strategy for writing
EFL Hacks to learn English
15 key business words to improve score in an Engli...
Winter words
Are these the World's spookiest castles?
Show someone they're loved this Christmas