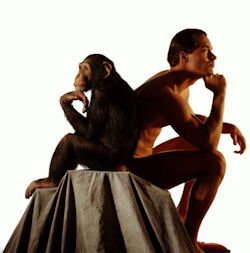 Language is what separates humans from animals and is one of the most important aspects of being human – it is what makes us unique.

Although, anyone who has attempted to learn a foreign language will tell you – there is a gulf of difference between knowing a language and being able to communicate or use it.

There many variables which go into making up a language (although we will look at just a few here) including:

Semanticity – where words have specific meanings.

Displacement – using tenses to talk about past and future events or abstract concepts and hypothetical situations.

Structural Dependence – How words are placed in a sentence or clause which can alter the meaning.

Grammar and Syntax – how words are constructed to give meaning

Have you ever wondered why apes and monkeys are unable to talk?

Evolutionary psychologists suggest that language developed through adaptation, which happened around 5 million years ago when humans separated on the evolutionary path, from higher primates.

Physical differences between humans and animals lie in the throat anatomy, which enables a large range of sound production. The brain area responsible for language production – the Planium Temporale is larger in humans in the left cerebral hemisphere than in any other animal on the planet.

Wernicke’s studies discovered that damage to this area resulted in the inability to understand language and produce fluent speech – “Fluent Asphasia,” whilst Broca found a more anterior region of the brain that is used for language production. When this area is damaged, the results are discontinued speech production – “Non-Fluent Asphasia.”

Sperber’s studies focused on “Metarepresentation,” which is a reflection on our own and other’s mental processes, and results in the interpretation of what others would to do or think in a certain situation or context. People can imagine what they think others are thinking – which is a huge evolutionary advantage which allows us to lie to others – an ability that children under 2 years of age are unable to do – which involves qualities of semanticity, displacement and structural dependence – which animals are not able to carry out.

Cognitive psychologists focus on the properties of sound and ‘process recovery’ in communication – how a person forms a sentence and relies on the listener to recover their ‘thoughts’, designed to convey meaning.

Ever been in a situation where you have considered that you have communicated a clear and simple message that was understood differently or produced effects that were unexpected?

Mayer and Schanveldt researched “Semantic Priming”, the ability to recognise words related in meaning and “Associative Priming” – words that occur close together, such as Work-horse, summer – holiday etc. Semantic priming and associative helps us understand and recognise meaning, in fact sometimes so rapidly that we only listen to half of what was said.

There are, of course many theories and variables which form the difference between animals and humans as far as language is concerned, but we will not look too deeply at this at this point.

Researchers argue that sentences we form are already well formed structures, unless we are using relatively new forms and structures, as we would if we were learning a foreign language – representation has to formed and not retrieved in this case. As words in a sentence are sequential, there remains the question of when we build the representation – do we wait until the sentence is completed or do we start building as words are perceived?

1. The meaning of the individual words.

Take the sentence – “Hello.” it is grammatically correct and conveys meaning.

Chomsky sought to prove (or disprove this) through his grammatically correct, but meaningless sentence, “Coulourless green ideas sleep furiously.”

In some parts of Europe, during the middle ages, Latin was the written language, despite the fact that nobody spoke it any more – apart from the clergy and other minority levels of society – this is called Diglossia, and still occurs throughout the world today in certain contexts.

Social psychologists view language as a social, process, and who would argue with that one? Language is used between two or more people as a social interaction, where meanings are formed, contested, constructed and construed, dynamically through prior knowledge and cultural knowledge of situations – communication is for a function, to get things done. This also applies to solitary thinking, reading and reasoning, where the use of language is carried out by way of a dialogue with the self – the internal voice.

It is clear that some researchers have successfully ‘taught’ forms of language to primates – although to date none have been able to reproduce spoken language – it stays on the level of understanding, apart from some experiments where sign language and ‘token’ language has been produced more of a reaction than any real form of interaction, and this does not prove that they would have developed a language among their own species.

The question remains as to whether the attempts at human type communication is authentic or just clouded by exaggerated empathy that sees things that were not really there. Whatever, the result, there is no evidence of ‘turn-taking’ a feature of human conversations and little spontaneity – one such experiment resulted in 96% of the responses being made up of requests, which were then rewarded in some way – a parallel which is closer to Pavlov’s dogs than true communication.

There is the argument put forward by evolutionary psychologists that chimps could have maintained some form of ancestral language ability, as they are the closest animal relatives of humans.

The fact remains that humans are hard-wired to learn languages – it is a natural instinct, but in order for it to be successful, it must occur in a social setting, which necessitates interaction with others. Studies with feral children has revealed that their ability to learn languages and to become fluent in the language is limited by the late age that they learn – indeed the consensus among linguists regarding bilingualism is that the ceiling for becoming bilingual in a language ends at around 14 years of age – this does not mean that people cannot reach a high level of competence, just that there is a difference in fluency and bilingualism.

Animals can undoubtedly communicate within their own species using sounds and gestures, although this is a long way from any language as we know it – and this is what makes humans thoroughly unique, the ability to communicate with, and learn languages, naturally and instinctively.

In summary, language is What Makes Humans Unique.

Self concept and learning - can we teach adults an...
10 Weird Inventions You Need To See To Believe
Faster, Higher Stronger The Olympics
Learning English - Valérie