Learners – Learn to Love your Mistakes 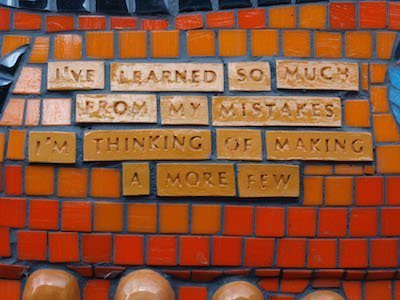 Learners – Learn to Love your Mistakes

More than half of the planet speaks two or more languages, over 50% of us are bilingual or multilingual, monolingualism is starting to be seen as a culture and nothing more, and definitely not something we are destined to live with.

Many adults, who have failed at language learning often resort to ideas that they are not good language learners or are just not cut out to learn a language, which is pretty bizarre, as a concept, as they have already learnt one language – their own.

So the question remains as to why they have failed at language learning.

Is it really that they are not cut out for languages or is it something more fundamental?

In most cases, it is the processes within the system in which they have learnt (or at least attempted to do so) which is at fault.

A large amount of language teaching provision is based on outmoded methods, akin to that which is used for teaching chemistry, biology or even maths.

A lot of language teaching methods are exactly aligned as to how dead languages, such as Latin and Greek are taught, using grammatical rules (and woe betide you if you forget them!) and rote methods of learning (off by heart).

The point is, communication is not a binary process from A to B, so learning by heart is a pointless exercise – language is about emotions, feelings and spontaneity and needs to be used.

Communication is achieved through a series of steps – remember when you were a child, using your own language, at two years old you probably didn’t say something like, “Mummy, I would really like a soft-centred toffee, if you would be so kind as to offer me one.”

You more than likely said something like, “Mummy sweeties.”

The thing is, both versions functionally end up with the same result – you got a sweet (if you were good.)

So why do teachers insist on learners coming up with exactly the correct form for language production?

Learners will be forgiven for being too direct as it is blatantly obvious that they are at a stage where they are learning the language.

Obviously, I don’t suggest that the basic functional forms of the language are used ad infinitum, but let’s start somewhere and then get to a form of language proficiency at a later stage.

Give learners the chance to make mistakes and let them enjoy making them – I make hundreds of mistakes in French on a daily basis, but I am communicating and learning to get them down to an acceptable level and I’ll get there … eventually.

People smile at my mistakes and to be honest I couldn’t care less, as I know that I am using the language and I have no problem with that.

One of the reasons we interview some non-native English speakers on the EFLPodBlog is that we want people to make mistakes, as this is good for them and to their non-native listeners as a way of helping them to identify and finally eradicate them in time.

Behind every mistake is an insight and an opportunity for learning, as long as some element of reflection is included – in learning we call this metacognition – thinking about thinking, a vital element in lifelong learning.

As language learners – learn to love your mistakes and most importantly, love to learn from your mistakes – there is usually very little at risk and a huge amount to gain from them.

Miracle language learning solutions - neither mira...
The Curious Off Side Football World Cup Quiz
Listening strategies in Language Learning
Brain tricks to fool your friends
Why you shouldn't have a Bucket List !
Life in Lockdown Personality Quiz