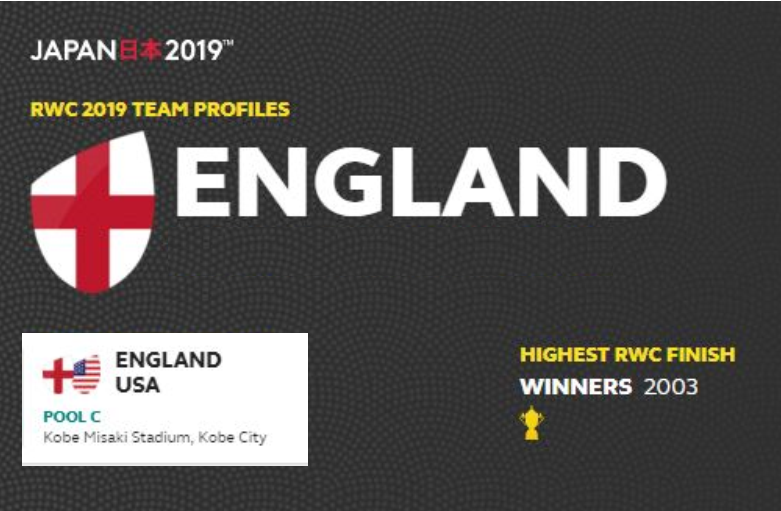 England’s second pool match at Rugby World Cup 2019 will be against the USA at the Kobe Misaki Stadium on Thursday 26th September.

England previously met the USA during the pool stages of the 1987, 1991 and 2007 editions of the tournament. England won those matches 34-6, 37-9 and 28-10 respectively, but will this time be different in a 2019 RWC that is clearly one of the most open World cups since the tournament began.

Overall, England and the USA have played each other on five occasions and England have won every match.

Head coach Eddie Jones is confident his reshuffled England team will cope with their short turnaround as they prepare for Thursday’s game against the USA, four days after battling past Tonga.

Only five of the team from Sunday’s 35-3 win in their opening World Cup game are keeping their starting places.

“We trialled a four-day turnaround against Japan last autumn, to make sure the players have experience of it.”

George Ford captains the side at 10, with Billy Vunipola selected again at eight and there are World Cup debuts for wingers Ruaridh McConnochie and Joe Cokanasiga plus centre Piers Francis.

Try your hand at this short quiz before the England v USA rugby match on Thurday 26 September.

How much do you know about the teams and the game?

Try your hand at this short quiz before the England v USA rugby match on Thurday 26 September.

How much do you know about the teams and the game?