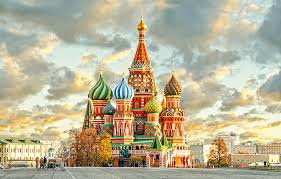 So, after one week of watching the Football World Cup and the endless attempts by journalists to make interesting reports and write entertaining articles about Russia, what have you learnt about this country ?

Forget the football are you a champion at general knowledge ? Test yourself with this Thinking Person’s non-football quiz.

Don’t worry about the offside rule concentrate your energy on improving your ability to make an educated guess !

Has all the buzz about Russia inspired you to put the country on your Holiday Bucket List? Take a look at some of these Bucket List suggestions, what do you think ? Tempted ?

This is truly a city that never sleeps, hosting some of the wildest parties and most lavish theatre performances. In a country where buying a ticket to the ballet or opera means planning months before the performance, make sure not to miss the hype and experience the legend of the Bolshoi Theatre. Later, you can  continue the night on to the streets in the centre, where you’ll find some of the most classy nightclubs.

Kaliningrad is the most western city in Russia and possibly also one the most European-looking ones. Due to its unique location on the shore of Baltic sea, it is known as the amber capital of the country, as most of these semi-precious stones come from that city. So once you are done with your fan duties and you can get some memories shaped in amber stone to take home with you.

Every June, The Venice of North, as St Petersburg is sometimes called, holds a huge festival to celebrate ‘white nights’ – the whole month without a proper night. Due to the northern location of the city, in June, the day almost never ends, and the nights look more like an overcast day. The whole city is out partying and enjoying rooftop terraces and some fine dining, and the culmination of the month is the beautiful Scarlet Sails festival – a spectacular music, light and theatrical performance right on Neva river.

4. Visit ‘The Motherland Calls’ in Volgograd

As one of the most important cities in the south of Russia, Voldograd is a popular tourist destination. The city’s fame is linked with the biggest memorial complex in Russia: The Motherland Calls. Dedicated to the Stalingrad battle of the Second World War, this statue is one of the tallest in the world and undoubtedly one of the most impressive.

5. Be inspired by space in Samara

If you’re fascinated by the history of space exploration, and Russia’s role in the space race, head to the Museum of Space History in Samara. Filled with information about Russian space expeditions and development, rockets and other spectacular equipment, this museum is a great getaway for several hours between the World Cup matches.

Sochi is a multicultural city offering plenty of different cuisines and dishes, although Caucasian cuisine is the most beloved by locals as well as tourists. The rich taste and original recipes make the dishes totally irresistible, and walking around the city, you’ll catch the scent of spices and grilled meat, along with the distinctive flavour of fresh lavash bread. Spend time with friends at Sochi’s Caucasian restaurants and enjoy great food.

Forget the football, are you a champion at general knowledge ?

Of course if you want to learn some football vocabulary, click on this link and if you want to try some more of our Thinking Brainy Quizzes, click here.

The BIG Valentine's Day Trivia Quiz
The French Presidential election quiz
Why Do American Accents Sound That Way?
Who said it, Donald Trump or Mr Burns from The Sim...
Comprehension and language focus quiz for Experien...
Classic All Blacks Carlos Spencer rugby player