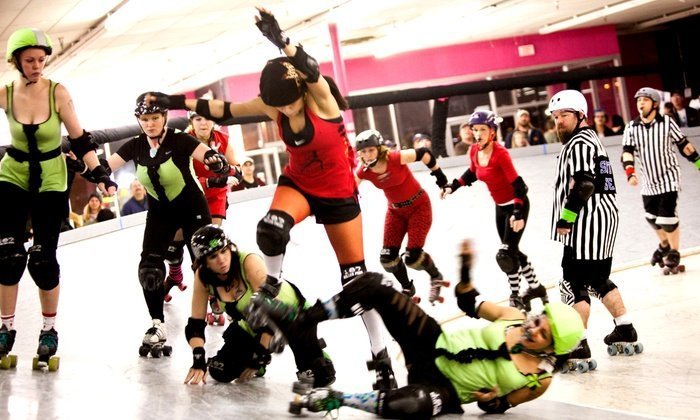 Fast and Furious Roller Derby, a sport that is really taking off in recent years.

Roller derby is a contact sport played by two teams of five members roller skating in the same direction around a track.

A game play consists of a series of short match ups (jams) in which both teams designate a jammer who scores points by lapping members of the opposing team.

The teams attempt to hinder the opposing jammer while assisting their own jammer—in effect, playing both offense and defense simultaneously.

Roller derby is played by approximately 1,250 amateur leagues worldwide, nearly half of them outside the United States.

While the sport has its origins in the banked-track roller skating marathons of the 1930s, Leo Seltzer and Damon Runyon are credited with the basic evolution of the sport to its initial competitive form.

Professional roller derby quickly became popular, in the ensuing decades after the 1940s, however, it predominantly became a form of sports entertainment where the theatrical elements overshadowed the athleticism.

This gratuitous showmanship largely ended with the sport’s contemporary grassroots revival in the first decade of the 21st century.

Although some sports entertainment qualities such as player pseudonyms and colorful uniforms were retained, scripted bouts with predetermined winners were abandoned.

Listen to Susan interviewing Marie, a beginner in the world of roller derby, at a match in Toulouse, France.

After listening to the podcast try the quiz

Why you forget your words when speaking English
One hit wonders
EFL PodBlog Easy Sports Quiz 1
Presentation skills: warm up your voice with dict...
Planning a holiday getaway
The Tour de France; the Then and Now Quiz