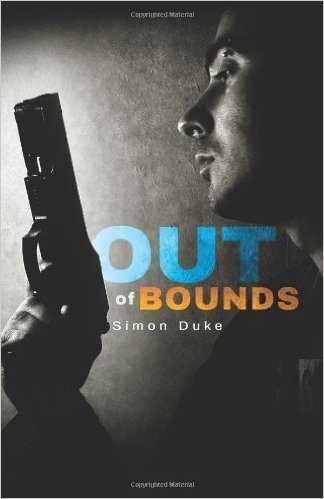 SIMON DUKE was born in Stoke-on-Trent (UK) in 1979. He obtained a B.A. in French with Film Studies in 2001 and has been working in journalism ever since.

He currently lives in Toulouse, France. ‘Out of Bounds’, his first novel, was published in 2014.

‘The Perfectionist’, his second book, will be launched on 19 January 2016. To find out more visit http://simongduke.blogspot.com “

Here’s the back cover blurb for ‘The Perfectionist’:

“Iowa, 1988. An unidentified severed head is found rotting in a corn field. Confronted with this gruesome discovery, Gerry Stokes – an arrogant and obnoxious newspaper reporter – agrees to cover up the affair. But the truth can’t be concealed forever.

More than twenty years later, Stokes must finally atone for his errors as the past returns with a vengeance. Forced into an investigation to discover what happened all those years ago, he stumbles upon a sordid truth: the victim is one of many; people seemingly chosen at random across America by a serial killer at large for more than two decades; a killer with a unique and horrific modus operandi who’s flown under the radar. Still at large the killer seeks to achieve artistic perfection in his methods of execution. He is “The Perfectionist”.

While tracking the killer under the cloak of FBI suspicion, Stokes sets himself an ambitious target and potential path to fame: write a book that leads the police to the killer, a first in the history of publishing.

The stakes are high and the pressure is on. Stokes is in the race of his life to discover The Perfectionist’s identity and publish his bestseller, while forced to bend the notion of what is ethically right.

Here’s the longer synopsis for ‘The Perfectionist’: http://simongduke.blogspot.fr/2015/02/synopsis-perfectionist.html

The ebook for ‘The Perfectionist’ is already available for pre-order on Amazon, Smashwords, Barnes & Noble.

Buying and Selling on-line
Why do learners have difficulties listening in Eng...
James Bond - Spectre - The movie
Asking Polite questions in English
Rebecca - Neonatal Nurse
Being bilingual, is it all good news?